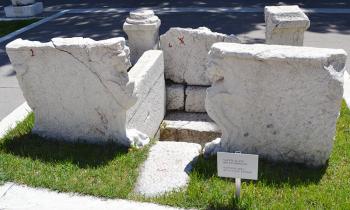 Recent epigraphic studies have contextualized inscriptions within their archaeological settings, bringing these stones into the field of material culture studies. The time is now ripe to consider the full life-span of inscriptions and the cumulative assemblage of inscribed material on display at any one time. Although inscriptions appear to be “set in stone” at the moment of their carving, they are actually a dynamic medium capable of communicating with viewers centuries later. By examining textual and archaeological sources in Asia Minor, I argue that individuals in late antiquity (fourth–sixth centuries C.E.) read and reinterpreted older epigraphic material to suit present needs. Spoliated inscriptions built into a baptistery now in the museum in Burdur, Turkey, show evidence of sophisticated manipulation aimed at hiding the pagan identity of the original dedicator. At Ankara, I argue, the reuse of the Temple of Augustus and Roma as a church should be dated to late antiquity, and I consider potential modes of reading the Res Gestae Divi Augusti and a list of Galatian priests on its walls from an Early Christian perspective. Although the inscribed words remained the same, the messages communicated were transfigured by the profound shifts in cultural viewpoints that accumulated in the Late Imperial period.