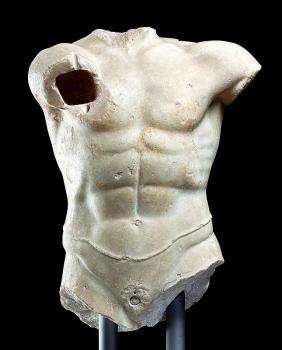 This article focuses on periodization in ancient art history, on aesthetic notions and judgments in ancient literary sources, and on the creation of the modern stylistic and cultural classification of the Severe Style period. Conventionally, this stylistic phase spans from ca. 480 to 450 B.C.E. and is generally associated with a new style adopted by artists soon after the Persian Wars and with the sculptural group of the Tyrannicides by Kritios and Nesiotes. This investigation provides an overview of the artistic production by Kritios and Nesiotes and analysis of signed monuments from the Athenian Acropolis; an examination of literary sources concerning Kritios and Nesiotes and aesthetic judgments regarding Late Archaic artists and their works in Greek and Latin sources from the end of the fourth century to the Early Imperial period; and an exploration of the modern meaning of the Greek and Latin words skleros and durus (“rigid, motionless, stiff” rather than “severe”). I propose that it is not possible to distinguish such a “Severe Style period,” since technical and stylistic improvements are detectable on statues dating from before 480 B.C.E., and that a paradigm of continuity, as suggested by ancient literary sources and archaeological evidence, is preferable to a clear-cut division of artistic periods and styles.