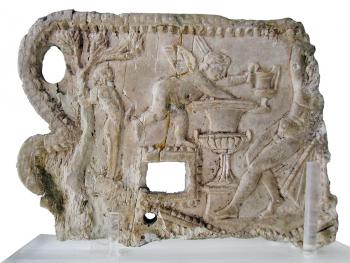 Several surviving artifacts of Roman imperial date consist of two small plaques designed for connection by balks (rectangular beams) and cylindrical dowels. All but one of the surviving specimens are of ivory and were probably luxurious versions of utilitarian objects. All have decorative details; three particularly lavish specimens bear mythological narratives in relief on both sides of each plaque. The original function of these objects is controversial, but the strongest evidence supports their identification as looms for weaving narrow strips to be used as decorative trim. If this reconstruction is correct, then their intended owners were primarily women, and the viewers of them were the members of those women’s private households. Although most of the craftsmen who carved these very technically demanding works were probably male, the iconography of the decorated examples may reflect the social roles of their owners. The relief-decorated specimens in the Museo Archeologico Nazionale di Napoli and the Römisch-Germanisches Museum in Cologne appear to depict myths that concern childbirth and motherhood. This essay examines how the functions of these objects dictated the reading of their narrative content as their viewers interacted physically with them. The narratives delivered didactic, comforting, and stimulating messages.