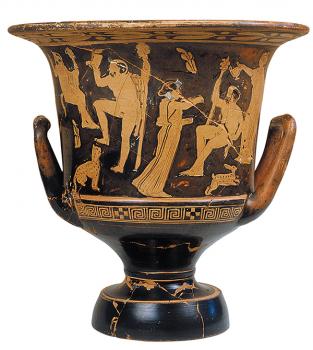 In the absence of extensive written sources, the history of the Macedonian kingdom prior to the reign of Philip II remains largely understudied. Yet, the archaeological record of the region, although primarily of funerary character, has much to contribute in this direction. In this article, I examine the funerary evidence particularly from the Classical period until the rise of Philip II. Focusing especially on vases, which formed the most common type of offering, my discussion begins with an overview of the types that appear in classical Macedonian graves until ca. 360 B.C.E. Then, with the aim of defining the possible ideological and practical funerary functions of these artifacts, my analysis moves to the patterns of intra- and intersite synchronic variability in their consumption. Changing to a diachronic perspective, I demonstrate that between the sixth and the fourth centuries B.C.E. the patterns of synchronic variation in the funerary consumption of vases did not remain constant. Finally, I argue that changes in these patterns are strongly suggestive of specific transformations in the sociopolitical structures of the kingdom. However, I stress that this interpretation needs to be tested against evidence from nonritual contexts, which at this time remains scanty.