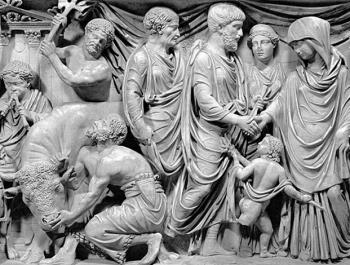 This paper offers a reexamination of a small Augustan lares altar found on the Capitoline Hill and now in the Museo Nazionale Romano at the Terme di Diocleziano. The altar features two women, one on each of its sides, wearing very similar costumes and offering libations, and twin lares on the front. The discussion analyzes the altar’s original context, scale, iconography, workmanship, and state of preservation. This altar fits into the well-known series of altars dedicated by freedmen vicomagistri in the local neighborhoods (vici) in honor of the newly named Lares Augusti in and immediately after 7 B.C.E. Based on this setting and their elaborate costumes, which resemble those of the vestal virgins, these women can be identified as Roman brides, who regularly made offerings to the local lares near their new home on their wedding day. The Terme altar provides valuable evidence for the religious roles of Roman women, specifically in relation to lares at crossroads shrines (compita); it is the only representation of brides in a relief from the city of Rome and a rare example, among extant images, of women pouring a libation.

By Harriet I. Flower and Meghan J. Diluzio