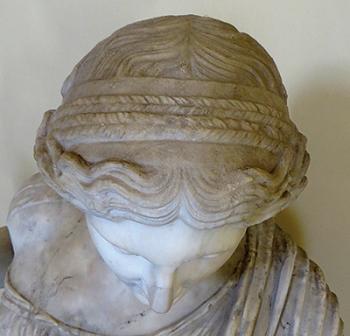 The statue of Aphrodite formerly in Syon House in London is an important instance of the Roman copying tradition, a phenomenon crucial to the understanding of Roman and Greek sculpture production. The statue is a high-quality product of the early first century C.E. from metropolitan Rome; it was esteemed as such in the Italian Renaissance, appreciated as such in 18th-century England, and to some extent scorned as such in the first decade of the 21st century. But after another marble version of the same statue type was excavated in Pozzuoli, the Syon statue regained attention and value. This paper reviews the history of the statue; discusses the statue in the context of its ancient type by presenting its details of manufacture and comparing them to other examples of the type; considers the distinctive use of such statues in the Roman period; explores possible interpretations; and concludes by applying traditional methodology to trace the date, subject, and maker of the model. This methodology suggests that the model of the Syon-Munich-Pozzuoli type was a statue of Aphrodite in Athens of ca. 420 B.C.E., attributable perhaps to the sculptor Alkamenes. The paper demonstrates the processes involved in the historical and aesthetic assessment of a Roman copy.