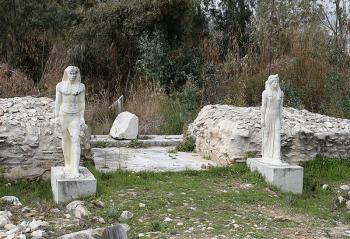 This study examines the sculptural program of the Sanctuary of the Egyptian Gods at Marathon, part of Herodes Atticus’ villa complex. These monumental statues depict the Egyptian gods Isis and Osiris in an unusual Egyptianizing style. First, I consider the sanctuary’s intended audience, arguing that Herodes used this part of his villa for philosophical discussions with pupils and members of the Middle Platonist Athenian School. Next, I reread the sanctuary and its sculptures in light of Middle Platonic philosophies of the god, focusing on Plutarch’s De Iside et Osiride and a group of Isiac texts called aretalogies. Both sets of texts emphasize Isis’ ability to unify deities from around the Mediterranean under a single godhead while also emphasizing each god’s discrete powers and personalities. I argue that the sanctuary’s design and sculptural program responded to these themes in a way that primed viewers to reconsider their textually derived understanding of Platonic philosophy. This approach demonstrates that the types of viewing across multiple media proposed for literary genres should also be considered for philosophy; that is, viewing art may have been a method for creating and critiquing philosophical thought in ancient Greece.

By Lindsey A. Mazurek