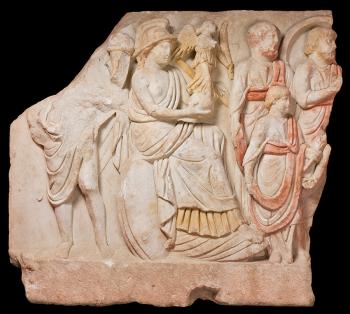 Ancient Nicomedia, the most important capital of the eastern Roman empire during the Tetrarchy, now lies below the modern industrial city of İzmit. The first systematic archaeological research on Diocletian’s capital, supported with a grant from The Scientific and Technological Research Council of Turkey (TÜBİTAK), examines a series of monumental reliefs and statues from a terraced imperial cult complex, found in the Çukurbağ district at the heart of modern İzmit. Excavations have brought to light more than 30 relief panels (average ht. 1.0 m x wdth. 1.5 m), the only surviving examples of Late Roman state reliefs that have extensive paint preserved on them. The panels illuminate multiple aspects of the art of the period, including the brightly colored costumes and the new and distinctive self-representation of the tetrarchic emperors and their administration. In this article, one of these relief panels, with a representation of two emperors embracing, is discussed as the precursor to the well-known porphyry Tetrarchs from Venice and the Vatican. It is argued that the relief panel is part of a larger adventus scene that shows the meeting of the two diarchs, Diocletian and Maximian, and thus dates from slightly before the onset of Tetrarchy in 293 C.E.