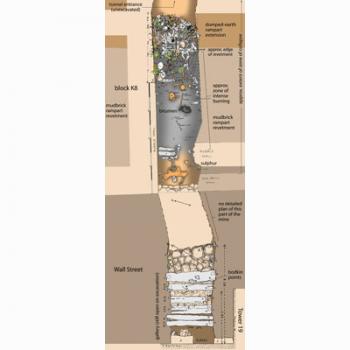 The Sasanian Persian siege that destroyed Roman-held Dura-Europos, Syria, ca. 256 C.E. left some of the best evidence ever recovered for the nature and practices of ancient warfare. Perhaps the most dramatic of the archaeological deposits, excavated in the early 1930s, were those resulting from the mining duel around Tower 19 on the cityís western wall, during which at least 19 Roman soldiers and one Sasanian became entombed. Recent reanalysis of the excavation archive suggested that the mine evidence still held one unrecognized deadly secret: the Roman soldiers who perished there had not, as Robert du Mesnil du Buisson (the original excavator) believed, died by the sword or by fire but had been deliberately gassed by the Sasanian attackers. This article discusses the implications of this conclusion for our understanding of early Sasanian military capabilities and reviews the question of possible reexcavation in search of the casualties of Tower 19, whose remains were neither studied nor retained.