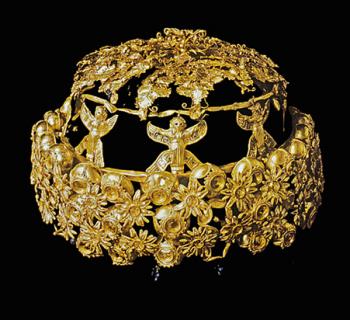 Through an analysis of the ninth- to eighth-century B.C.E. mortuary assemblages from the Queens’ Tombs of Nimrud’s Northwest Palace in Iraq, this article interprets dress elements and ensembles in terms of identity and ideology. The Queens’ Tombs offer the only in situ evidence for royal Neo-Assyrian female dress. The finds, which have never before been studied as comprehensive ensembles, correspond to the few surviving images of Neo-Assyrian queens and greatly expand our evidence for the manner in which a queen’s ideal appearance was constructed and embodied. Considering dress in death, as well as in life and the afterlife, this article proposes a standard, but flexible, queenly ensemble. To facilitate analyses, I present a figural model based on an aggregation of archaeological, art historical, and literary evidence for ideal royal women. I then analyze the dress elements and ensembles as expressions of courtly, queenly, and individual identity. Finally, I interpret queenly dress as an ideological mechanism that manifested imperial power through its materials, style, and iconography. Overall, this article aims to provide a new foundation for more thoroughly integrating the visual and material presence of queens into interpretations of the Neo-Assyrian court and its eternally conceived universe.