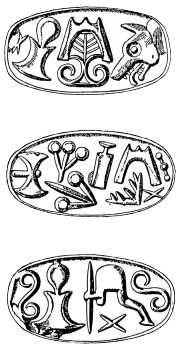 While some aspects of Arthur Evans’ framework for the Minoan civilization have undergone modification, its main defining characteristics remain widely accepted. We should find the endurance of Evans’ theoretical framework surprising rather than comforting, not least because of the slim empirical and epistemological basis for its formation. This study provides a detailed exploration of the genesis of concepts such as the Minoan palace (or palace-sanctuary), the priest-king, the mother goddess, and the essentially European (non-“Oriental”) character of the Minoans. By situating these concepts within Evans’ narrative project, I try to demonstrate that these are not objective interpretations that flow obviously from the data but rather began life as preconceptions formed by Evans as part of his Eurocentric agenda, well before the start of his excavations at Knossos. His modus operandi was to borrow selectively from theories and ideas (e.g., of race) that were current at the time in order to propagate his idea of Minoan civilization as the earliest in Europe and distinct in nature from other, better-known civilizations of the East (e.g., Egypt, Mesopotamia).