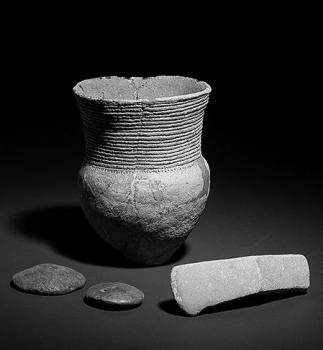 In this article, we approach the Neolithization of southern Scandinavia from an archaeolinguistic perspective. Farming arrived in Scandinavia with the Funnel Beaker culture by the turn of the fourth millennium B.C.E. It was superseded by the Single Grave culture, which as part of the Corded Ware horizon is a likely vector for the introduction of Indo-European speech. As a result of this introduction, the language spoken by individuals from the Funnel Beaker culture went extinct long before the beginning of the historical record, apparently vanishing without a trace. However, the Indo-European dialect that ultimately developed into Proto-Germanic can be shown to have adopted terminology from a non-Indo-European language, including names for local flora and fauna and important plant domesticates. We argue that the coexistence of the Funnel Beaker culture and the Single Grave culture in the first quarter of the third millennium B.C.E. offers an attractive scenario for the required cultural and linguistic exchange, which we hypothesize took place between incoming speakers of Indo-European and local descendants of Scandinavia’s earliest farmers.

By Rune Iversen and Guus Kroonen