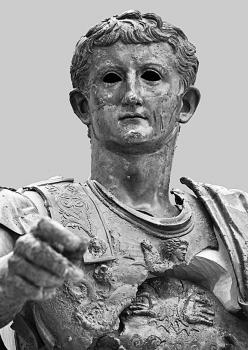 Although discovered more than 50 years ago near Amelia (Italy), a bronze cuirassed statue of Germanicus has gained relatively little attention. Represented on its elaborate breastplate is the death of Trojan Troilus at the hands of Achilles. The author of the principal monograph on the statue proposes that it originally portrayed King Mithridates VI, who saw himself as a new Achilles in his war against Rome. According to this theory, the depiction of the defeat of Troilus would have served as a reference to Mithridates’ victory over Rome, which traced its origins back to Troy. In the end, Mithridates was himself defeated by Sulla, who supposedly brought the statue back to Rome, where its head was replaced first with a portrait of Sulla and eventually with one of Germanicus. In this article, I argue that the portrait head of Germanicus was indeed a substitution, but not for a head of Mithridates or Sulla. The original portrait would instead have represented Caligula, whose head would have been replaced with that of his father, Germanicus, after Caligula’s assassination and damnation. My interpretation is based on decorative motifs, technical considerations, and a very different appraisal of the meaning in this context of the defeat of Troilus.