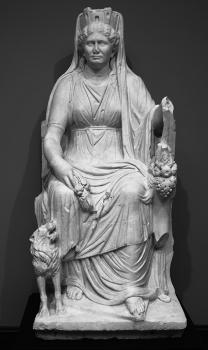 This article investigates a Roman marble portrait sculpture with divine attributes known as “Portrait Statue of a Woman as Cybele.” Now in the J. Paul Getty Museum, the portrait has been interpreted by scholars as depicting a priestess of the goddess. Although the figure’s main attributes (lion and turreted crown) are typical of the Phrygian divinity, she also presents elements belonging to other Roman goddesses primarily associated with the feminine virtues of chastity and fertility, such as Ceres (wheat and poppies) and Fortuna (cornucopia and rudder). This selected assortment of attributes indicates that the woman for whom this portrait was commissioned was interested not necessarily in assimilating herself to a particular divinity but rather in presenting herself as the embodiment of the principal virtues of a respectable Roman matron. Cut in the sculpture’s back is a rectangular cavity large enough to contain a receptacle with the cremated remains of the individual for whom this statue was made. The analysis of the cavity, portrait head, and divine attributes emphasizing the patron’s feminine qualities suggests a funerary use of the statue. This study contributes to a better understanding of funerary customs in the early Roman empire.