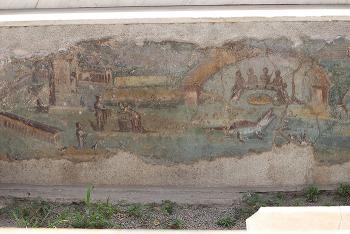 Despite long-standing scholarly interest in Roman “Aegyptiaca,” much work remains to be done to contextualize Egyptian or Egyptian-style material culture found in domestic settings. This need is especially pressing for “Nilotic scenes,” or wall paintings and mosaics depicting the Nile. While previous studies have identified general areas in ancient houses where such imagery was common, many questions remain open concerning the relationships between these Egyptian landscapes and their surrounding architectural installations, decorative ensembles, and artifactual assemblages. This study employs the frescoes from the garden triclinium of the Casa dell’Efebo, Pompeii, as a case study in the recontextualization of “Nilotica.” In contrast to older interpretations emphasizing Isis cult or anti-Egyptian stereotypes, a contextual analysis of this garden installation suggests new possibilities. Even as the Egyptian landscapes introduce a seemingly exotic element into domestic space, other aspects of the garden setting familiarize and domesticate the imagery. Simultaneously far away and familiar, the imagined landscapes of the garden transform domestic space into a microcosm of oikoumene and encourage viewers to engage in multiple possible ways with changing constructions of imperial, local, and cultural identities.