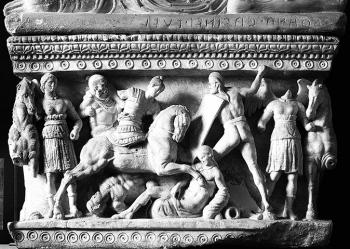 This article explores how Etruscan artwork presented soldiers in visual media during the Middle Roman Republic (ca. 300–100 B.C.E.), a period when Etruscan communities were required to contribute contingents to the Roman army. It proposes a class-based model for how Etruscans formulated their military identities. Elite representations, in particular cavalry combat on cinerary urns, displayed elaborately hellenized soldiers rather than Roman-style combatants. Meanwhile, nonelite representations, primarily featuring infantrymen on more economically accessible votive figurines, either displayed hybrid panoply or made no attempt to differentiate the portrayed soldier from a generic Roman citizen legionary. In the realm of martial identity, Etruscan elites in visual media appeared culturally aloof from Rome as well as socially removed from common soldiers in their own communities. The article concludes by placing the corpus of Etruscan evidence in the context of more scattered evidence from across the peninsula and suggesting that the tendency of elites to eschew the Roman panoply in visual media, and of nonelites to partially or wholly embrace it, was widespread in Italy prior to the Social War.