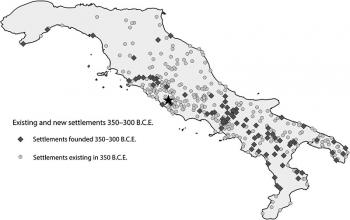 The article presents and discusses the results, relevant to the period 350–300 B.C.E., from an interrogation of a new archaeological database containing 583 (proto)urban centers (≥2 ha) of the Italian peninsula. Quantitative and geospatial analyses of site numbers, dated fortifications, and instances of regularized town planning reveal that the Early Hellenistic period was the most dynamic period of peninsular settlement growth in classical antiquity. Analyzing settlement patterns at the peninsular level counterbalances the strong regionalism of existing studies. Although there is already awareness of the processes described, here they are defined at the peninsular level for the first time, quantitatively and geographically, thus providing a reference for future research. This article also considers the challenges presented by the stark variances in the sources, quality, and quantity of data relevant to the archaeological sites. The project’s research design and methodology is described. A preliminary discussion on the causes of this settlement growth assesses existing regional explanations. Known contemporary supraregional processes are also discussed, including the rise in the number of rural sites and the Roman conquest. It is suggested that the vibrancy of major settlements might be linked with novel agricultural strategies or systems of landholding, and possible directions for future research are proposed.