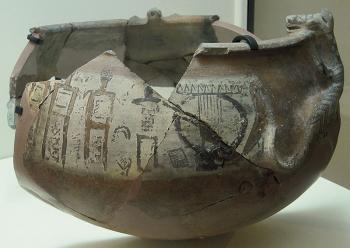 Contrary to the prevalent assumption that stringed instruments were absent from Phrygian music, tortoise-shell lyres excavated at Gordion show that such instruments were played in Phrygia during its heyday. Since the shells—or carapaces—are early and potentially the first from outside the Greek world, their identification is based on cautious analysis of worked edges, scrape marks, and a symmetrical pattern of drill holes that reveal details of the lyres’ construction and zoomorphic aesthetic. Two well-preserved examples from an abandonment deposit in the cellar of an extramural house on Gordion’s Northeast Ridge beneath Tumulus E can be dated stratigraphically to the first quarter of the seventh century B.C.E. This context of instruments and domestic artifacts preserves string music as the accompaniment to weaving, dining, and the worship of Matar (Cybele) in a prosperous household. These lyres clarify the musical culture of Anatolia, which is otherwise heavily abstracted in Greek myths and theoretical writings. Those instruments that Phrygia was best known for, the aulos and cymbals, are also materially and pictorially attested at Gordion, but the lyres expand the Phrygian soundscape to include a largely unknown polyphony.