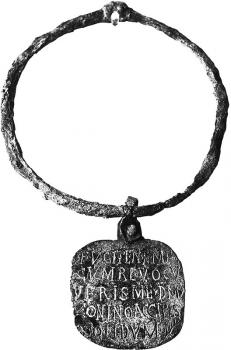 This article analyzes slave collars of the fourth and fifth centuries C.E. as a way of contributing to current debates about the archaeology of Roman slavery. Taking as my case study the well-preserved Zoninus collar, I first trace its history in antiquarian collecting and publishing in the mid 18th century. This scholarship was characterized by a profound split between text and object that has had lasting effects on the material we have now and how we approach it. In the second half of the article, I propose a two-part remedy: reintegrating the collars’ visual, material, and textual aspects, and exploring the very different perspectives of slave owners, audiences, and collared slaves. Approached in this way, these objects illuminate the lived experience of urban slavery; they also show how deeply slavery was woven into Roman visual, epigraphic, and material culture. These artifacts thus have implications for drawing material culture more fully into the study of slavery, and slavery more fully into the study of material culture.