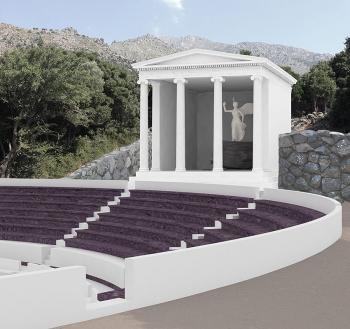 The recent conservation and reinstallation of the Nike of Samothrace, the restudy of its archaeological context and petrology, the collapse of the consensus that it celebrated the Rhodian naval victories at Side and Myonessos in 190 B.C.E., and the growing accord among naval historians that its ship is not a trihēmiolia together prompt a reexamination of its date and purpose. Fortunately, the monument offers three significant clues, all previously overlooked or underappreciated. First, why was it dedicated on the remote island of Samothrace, and not, for example, on independent Delos? Second, although ancient galleys could not fight in gales and never did, why is it battling one? And third, why is its ship made of imported Rhodian marble and probably a quadrireme, a vessel superseded elsewhere by the quinquereme but still favored by the Rhodians? The Great Gods’ rescue of pious initiates from storms at sea and second-century B.C.E. naval history point to one occasion in particular: Prousias II of Bithynia’s abortive invasion of Pergamon in 155, his impious assaults on the sanctuaries en route, his fleet’s sudden destruction by a storm, and the Rhodian contribution of five quadriremes to Attalos II’s successful naval counteroffensive in 154.