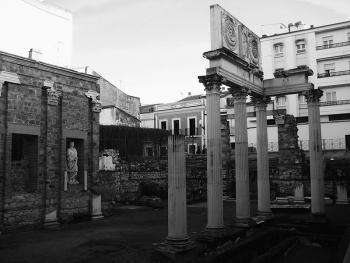 Throughout late antiquity, long after the collapse of the Roman administrative system, Augusta Emerita (Mérida, Spain) retained its role as a primary center for economic, political, religious, and social exchanges. However, the nature and the physical setting of many of those interactions changed significantly in this period. In particular, Emerita’s archaeological record from the fourth and fifth centuries confirms a trend away from the classical ideals that had contributed to the city’s early urban structure. This article argues that the sweeping urban changes experienced by the city are not just symptomatic of economic decline but that these changes should also be taken as important examples of the ongoing vitality of the Late Antique city center. As residents and officials encountered a new set of economic, political, religious, and social demands, they reshaped their urban environment to adapt to these new circumstances. The end result is most clearly distinguished in the remains of the late fifth-century city, but this post-Roman city has its roots in the Late Roman context of the fourth century.