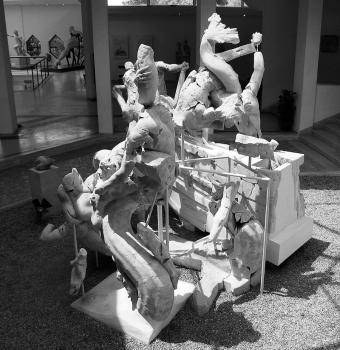 Seventeen marble samples drawn from the Scylla, Polyphemos, and Pasquino Groups, the Theft of the Palladium statue group, and the Ganymede statue discovered at Sperlonga in 1957 were investigated scientifically and proved to be all Docimium marble from the quarries of İscehisar near Afyon. New quarry data now available for the lithos lartios of Rhodes and for the white marble of the island of Kos and the quarries of Göktepe near Aphrodisias allow us to rule out old hypotheses as well as newly discovered sources of marble. These results as well as technical details about the manufacture of the sculptures seem to fully cohere with Andreae’s hypothesis that the Sperlonga groups were made on-site during the Tiberian age. They also tend to exclude alternative chronologies. The same arguments, however, make it difficult to believe that the Sperlonga sculptures and the Laocoön, thought to be made by the same Rhodian sculptors (Plin., HN 36.37) joining together several blocks of Parian Lychnites, are coeval. This apparent incongruity is briefly discussed, and the possibility of reconciling prosopographical and art historical considerations with technical marble data is examined.

The Docimium Marble Sculptures of the Grotto of Tiberius at Sperlonga