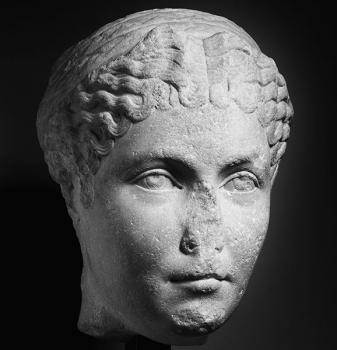 Excavations at the Antonine-era theater at Suessa Aurunca have yielded an unorthodox statue of the building’s patron, Matidia Minor, the sister of Hadrian’s wife, Sabina. This statue now permits the identification of Matidia’s portrait in six additional replicas. It also casts new light on the ways that a prominent woman’s likeness could be depicted in public settings and the stylistic options available for such images. The statue of Matidia Minor, rather than following one of the familiar formats for portrait statues of elite women, uses a composite technique of white and dark marble and a flamboyantly dramatic pose. Cascella’s important excavations have provided an unusually rich and informative context for the physical setting of the statue, which in turn provides a wealth of information about the relationship of this city to its benefactor. This article builds on this information to interpret the work in its broader contexts. Analysis of this statue in relation both to the portraiture and to the ideal statuary of the same era may allow for a broader understanding of the roles of elite women in Roman society in the Antonine era and of the iconography that expressed those roles.