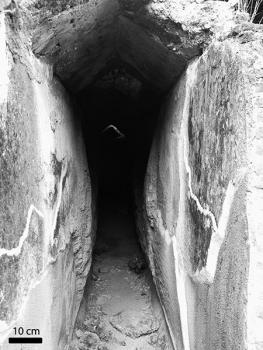 The reconstruction of Pompeii’s water-supply system is currently the focus of much debate. This debate is fueled by complicated and growing archaeological evidence for the water system within the town as well as three different proposed configurations of Pompeii’s aqueduct. The new synthesis of archaeological evidence presented here reveals three successive phases of piped distribution. The first, Augustan phase was altered considerably in a second phase to keep it operating, albeit with reduced supply, in the town’s last decades. At the time of the eruption of Somma-Vesuvius in 79 C.E., a wholly new, third phase was under construction. A new interpretation of the archaeological remains around Ponte Tirone shows that the water that supplied Pompeii’s distribution system came from either the Aqua Augusta or Somma-Vesuvius, but probably not from the Abella aqueduct. In addition, there is evidence in Ponte Tirone for a minimum ground uplift of approximately 30 cm on the flanks of the volcano prior to the eruption and greater deflation afterward. This uplift reduced and then stopped water supply to towns around the Bay of Naples, but whether it affected Pompeii remains unclear. This analysis further develops a new method of reconstructing past vertical ground movements via their impact on shallow-gradient, gravity-powered water systems.