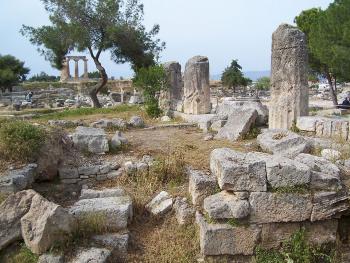 Although it is rarely discussed, a row of badly worn Archaic-period columns that lines the western side of the Upper Forum of ancient Corinth holds the potential to speak volumes about several periods in the long architectural history of the site. First fully exposed in 1933, this colonnade stretches northward from the northwest corner of the South Stoa to a point just west of the Central Shops that divide the Upper and Lower Forums of the Roman colony. Archaeologists have consistently noted that the details of these columns indicate they had once served as the interior colonnade for the nearby sixth-century B.C.E. Temple of Apollo. Additional excavation in this area in the 1970s has shown that they were reerected in their present location sometime in the middle of the first century C.E. This article offers a more careful examination of the colonnade in both its primary and secondary contexts. There is much this structure can reveal about the Archaic-period temple both before and after the destruction of Corinth in 146 B.C.E., the appearance of the western end of the Roman forum, and the practice of architectural reuse in the Roman era.