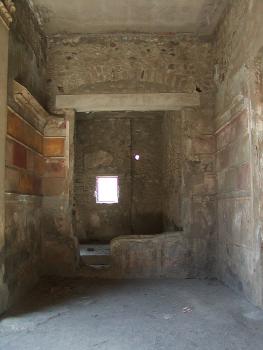 This article investigates the space of the alae within the atrium houses of Pompeii. It reviews ancient and modern references and presents as a case study the alae of Pompeii’s Regio VI. Following several seasons of architectural survey in Pompeii and drawing on newly published archaeological evidence from this region, data concerning the distribution, number, placement, and architectural features of the alae are presented. Modifications to the alae, such as the addition of storage installations, staircases, and lofts, are documented, suggesting a possible shift to more independent spaces that served specific functions associated with household activities. On the one hand, such modifications emphasize the versatility of Roman domestic space and provide glimpses into the disruption of domestic and urban life in Pompeii in the decades that preceded the 79 C.E. eruption. On the other hand, they may also serve as potential indices of broader socioeconomic changes in the Late Republic and Early Empire.