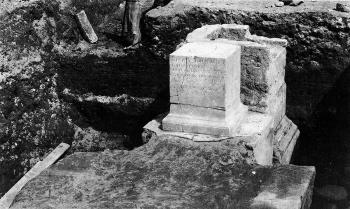 In this article, we present a reexamination of a shrine to Mercury preserved in situ in the basement of the apartment building at Via San Martino ai Monti 8, part of the ancient Clivus Suburanus, on the Esquiline Hill in Rome. A new campaign of documentation has yielded many new insights about the character, chronological development, and historical importance of this local shrine. We analyze the date and appearance of the republican shrine and consider the extensive changes that Augustus made when he restored it with money donated to him by the people of Rome on 1 January 10 B.C.E. The original interpretation of the monument as a compital shrine made after its excavation in 1888 is no longer tenable; rather, the monument is our only in situ example of an Augustan New Year’s dedication. The new analysis of the archaeological evidence for this particular shrine, considered within the broader context of other known examples of Augustus’ New Year’s monuments, not only highlights its unique aspects but also demonstrates what Augustus’ intentions for these monuments were and the dynamics of imperial interaction at such a local level. It provides a much better understanding of a distinctly Augustan group of monuments than does the literary evidence alone.

By Margaret M. Andrews and Harriet I. Flower