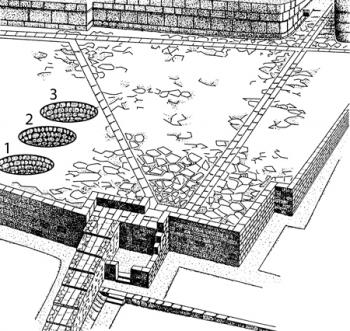 Since the beginning of archaeological exploration on Crete, agricultural storage has attracted a great deal of scholarly interest. The discovery of several palaces on the island has provided a range of evidence concerning storage: the development of a complex written accounting system, the production of thousands of storage jars, the building of storerooms, and built installations apparently devoted to long-term grain storage (the so-called kouloures at Knossos, Malia, and Phaistos). However, the presence in nonpalatial sites of structures that can plausibly be interpreted as silo complexes for long-term grain storage has not attracted much attention. This article is concerned with the Late Bronze Age evidence from Ayia Triada in the Mesara Plain, which has four such complexes, two of which are still unpublished. By drawing on the results of recent fieldwork, I contrast these buildings with those of other Mycenaean and Near Eastern sites to place Ayia Triada in its wider Aegean and Mediterranean context. Through the use of information found in the local Linear A and nonlocal Linear B documents, together with the archaeological evidence, this article highlights the role that long-term grain storage played within the local political economy in the 14th and 13th centuries B.C.E.