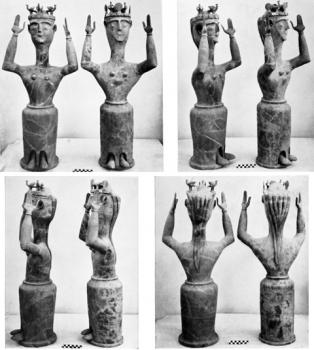 Large wheelmade terracotta figures with upraised arms, found together with typical cultic equipment, are characteristic of Cretan Postpalatial bench sanctuaries. It is generally assumed that these figures represent one or more deities and were used as cult images. Past and recent excavations on Crete illustrate a series of contexts that contain cultic equipment but lack such a figure with upraised arms. Most of these contexts date to Late Minoan (LM) IIIA–B and are found within larger building complexes that have potential communal functions. These complexes contrast with the contexts where the figures with upraised arms are found, which are freestanding public buildings and date to LM IIIB–C. This evolution suggests a change in the dynamics of and practices in cult spaces, an evolution that is here regarded as socially relevant. Within this framework, the figures with upraised arms are reconsidered as symbolic representations of votaries within the context of elite competition, rather than as cult images or cult statues.