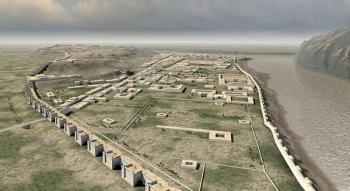 The excavations of the Greek settlement of Ai Khanoum took place between 1965 and 1978; they are not yet fully published, and work is still in progress. This article presents the spatial organization of the town by taking into account the results of recent research, which help clarify the different stages of its history. Ai Khanoum was founded as a city by the Seleucid king Antiochos I (r. 281–261 B.C.E.) and thereafter underwent development, particularly from the beginning of the second century. But it was only under Eucratides (r. ca. 170–145) that it took the form we now know. Several elements considered in this article shed light on the nature and functions of the settlement: its urban organization, the division between public spaces and private spaces, and the extent of Greek influence on these elements. We know that Ai Khanoum was a royal residence and that the Seleucid and Graeco-Bactrian kings were very much present there throughout its history. It may have looked like other eastern royal capitals of that time, whose architecture, which combined eastern and Greek influences, was inspired by that of the royal residences of the eastern part of the Seleucid kingdom.