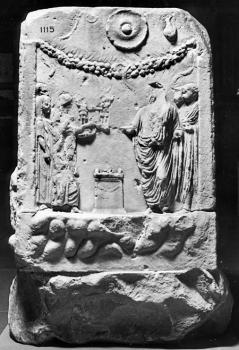 Controversy over the identification of the figures on the Belvedere altar has long hindered consensus about the meaning of this important Augustan monument. Attention has focused on the chariot-riding figure previously identified as Julius Caesar, Augustus, Romulus-Quirinus, Aeneas, or even Agrippa. I argue that references in Ovid’s Fasti and the Consolatio ad Liviam, as well as the dedicatory inscription of the altar, suggest this figure depicts Nero Claudius Drusus at his funeral in 9 B.C.E., which was observed by Livia and Gaius and Lucius Caesar. The Belvedere altar advertises Augustus’ dynastic ambitions during the early years of his pontificate, revealing the importance of the Claudii Nerones in Augustus’ plans to secure his family’s place as the preeminent military guardians of Rome. By implicitly associating Drusus’ triumphant career with the promise of empire evoked by the appearance of Vesta and the ancient Trojan “pledges of empire” within the domus Augusta, the Belvedere altar represents an early articulation of the divine claims of Augustus’ household to monopolize Rome’s military responsibilities. The assimilation of divine and human households on the Belvedere altar also parallels the increasing identification of young Augustan princes as living pledges of empire and as new Dioscuri.

By Bridget A. Buxton