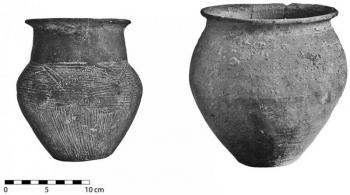 This article investigates the changes in foodways and cooking practices—especially in regard to the ceramic cooking assemblages—among the Celtic-speaking peoples of ancient Mediterranean France following the Roman conquest at the end of the second century B.C.E. I specifically examine the region of modern Languedoc-Roussillon using the ceramic data from the indigenous oppida of Lattara (modern Lattes), Castels à Nages, and Ambrussum, covering a period from the beginning of the third century B.C.E. through the first century C.E. I suggest that prior to the Roman conquest, during Iron Age II, there were few differences in cooking practices among the different blocks of houses at these sites. Although food was used for practices of social and political differentiation, these differences were probably manifested and articulated generally through differences in the quantity, rather than the quality, of the food. After the Roman conquest, however, particularly at the urban centers in the region, a new “high” cuisine emerged, one characterized by differences in taste and the quality of food among different social groups. These transformations were in turn likely related to important sociopolitical changes occurring in the region as local society became increasingly integrated with larger Roman colonial society.