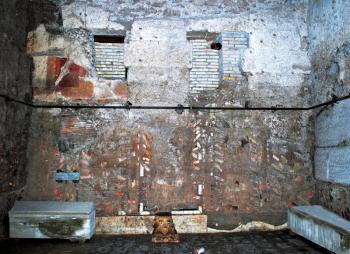 The crypt of the church of Santi Sergio e Bacco on Piazza Madonna dei Monti in Rome preserves the partial remains of a Roman structure showing multiple building phases. Tuff piers approximately 5 m tall belong to the atrium of a republican atrium house, with the surrounding rooms reflected in the adjacent spaces of the modern basement. During the Imperial period, this atrium was closed off, and a bath complex was added in adjacent rooms. The rooms preserve marble revetment, figural painted plaster of various styles, and floors of opus sectile. As a residential structure with a long occupation history, the house clarifies our impression of the lower Subura and its development as a neighborhood. When considered with other examples of atrium houses nearby, a standard lot size and house form for elite residential development can be suggested for the Subura and the southern Viminal slopes during the Republican period. Later renovations to the structure provide material evidence that a socially mixed population continued to occupy the valley of the Subura, and they demonstrate the persistent importance of the Argiletum as the primary thoroughfare of the area from the Imperial period through late antiquity.