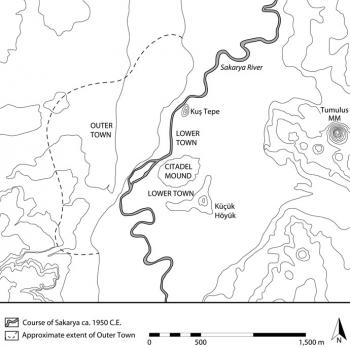 Archaeological study of ancient agriculture in the eastern Mediterranean has traditionally focused on what crops were farmed, at what sites, during which periods. Questions about why farmers adopted specific agricultural strategies, however, have been left to historical analysis. Such an approach divorces the study of the actual residues of farming from the cultural and social environments that contextualize the decision-making processes of farmers. Rich new archaeobotanical and zooarchaeological data sets from the Mediterranean, however, offer an opportunity to reconstruct agricultural and land-use strategies and to study diachronic changes in those practices in relation to contemporary changes in political economy. This article uses the case study of the urban site of Gordion in central Anatolia to illustrate new techniques for reconstructing agricultural decision making from archaeological data and to contextualize diachronic changes in agriculture within their social and economic framework. I argue that several aspects of political economy—namely, taxation, long-distance trade, and settlement patterns—are primary factors in the adoption of specific agricultural strategies at Gordion and beyond. I conclude that states with direct control of agricultural production are more likely to adopt environmentally unsustainable land-use practices than those in which farmers have considerable autonomy. The methods and broader implications developed here have great relevance for the study of agriculture and rural economy at other sites in the Mediterranean and Near East and in other areas of the ancient world.