“Good Luck” from Corinth: A Mosaic of Allegory, Athletics, and City Identity

“Good Luck” from Corinth: A Mosaic of Allegory, Athletics, and City Identity 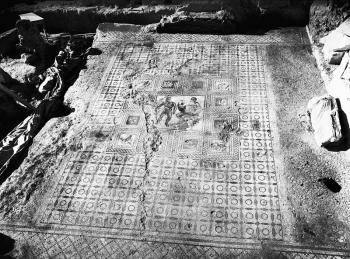 A Severan mosaic in the South Stoa in Corinth, Greece, depicts a victorious athlete and a seated, semidraped goddess. Holding an inscribed shield as well as a vessel from which water streams into a basin, she recalls two famous Corinthian trademarks, the Aphrodite of Acrocorinth and the nymph Peirene. They are but two reference points among her many explicit and implicit associations, and it is argued that her syncretic form would have inspired rich and textured readings by contemporary viewers. The mosaic is interpreted as an allegory of the Isthmian Games and the goddess as Corinth herself. The inscription on the shield, “eutychia” (good luck), reflects on the fortune of the victor and offers the same to the viewer. Iconographic and contextual analyses offer insights into the circumstances in which the work was installed, maintained, and viewed, as well as its relationship to broader concerns in Corinth and across the Roman empire.

“Good Luck from Corinth”: A Mosaic of Allegory, Athletics, and City Identity

By Betsey A. Robinson