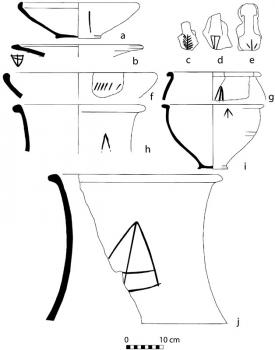 Simple marks on pottery are known in both the archaeological and ethnographic records of various societies, and numerous functions have been proposed for these so-called pot marks. Conventionally, Late Bronze Age Anatolian prefiring pot marks have been identified as signs of the Luwian hieroglyphic script and have been thought to convey information related to the volume or origin of the vessel, the quality of the vessel or its contents, the storage location of the vessel, or the sociopolitical context of its use. A more recent hypothesis proposes that these marks, rather than conveying specific messages beyond the production process, served as devices to record individual effort in a centralized economic system as part of a Hittite strategy of imperial integration. In this article, I revisit the question of the function and significance of Late Bronze Age Anatolian pot marks. I take a contextual archaeological approach to the published corpus, as well as a broad comparative perspective. The results of this analysis demonstrate clear regional differences in contemporary traditions that are indicative of different communities of practice rather than a centrally homogenized production organization. A cross-cultural investigation of relative pot mark frequencies, moreover, suggests a link between marking frequency and the scale of production.