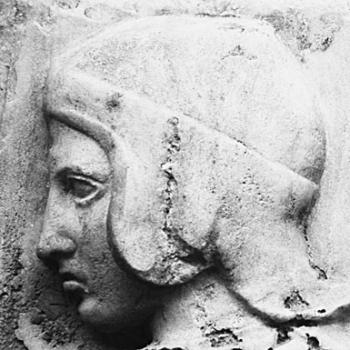 This article proposes a new interpretation of the grouping of the horsemen on the north frieze of the Parthenon, based on close observation of the rendering of horses’ manes. The north and south sides of the frieze each depict 60 horsemen. Whereas the south frieze horsemen can be divided into 10 groups of six riders, the cavalry of the north frieze shows a more complicated composition, the grouping of which has been much debated. I argue here that the north frieze also illustrates 10 groups of six horsemen. The 10 groups of the south cavalry are distinguishable not only by their dress but also by the rendering of the horses’ manes. Although the northern riders wear utterly different clothes and could not be classified into any groups by their dress, the styles of the horses’ manes suggest that the cavalry on this side also consists of 10 groups. It is notable, too, that the 10 groups each include a “rank leader.” Although the interpretation of the north frieze has often been related to the four archaic tribal divisions of Attica, it is now clear that both the north and south cavalries were intended to depict the 10 phylae of Periclean Athens.