Stigmata and the Cupids of Piazza Armerina

Stigmata and the Cupids of Piazza Armerina 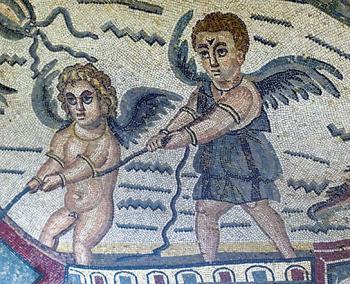 Cupids depicted in the early fourth-century CE mosaics of the Roman villa at Piazza Armerina in Sicily are marked with a V on their foreheads; this has been explained as a symbol connected to a workshop. I adduce evidence from Roman literature and from the artistic tradition of Cupid in Roman art that suggests the mark is, in fact, the stigma, a tattoo regularly applied by the Romans to people convicted of serious crimes. This adds a new iconographic component to the well-known artistic repertoire of Cupid Punished in Roman art. I suggest ways in which the motif may have functioned in the context of the iconography of the villa’s mosaics.